Energy demand is soaring across the globe, and is projected to more than double by 2050, driven by economic growth and the rising population.

Today, more than 80% of current energy consumption is from fossil fuels rather than renewable energy. But this is not a long-term strategy, as the burning of coal, natural gas, and oil for electricity and heat is the largest single source of global greenhouse gas emissions.

As a result, hundreds of governments around the world have declared a climate emergency and committed to net-zero emissions (not adding new emissions to the atmosphere) by 2050, if not earlier, as well as keeping the global temperature to 1.5°C above pre-industrial era levels.

Replacing fossil fuels with renewable energy sources, such as wind or solar farms would dramatically reduce carbon emissions, and with advances in technology, renewable energy is often cheaper. It’s a process that is already in place –– in 2020, the share of renewables had exceeded that of coal in generation for 153 days compared with 39 days in 2019 in the US.

Take Virginia as an example. The state passed legislation in early 2020 mandating 100% carbon-free electricity by 2050. Almost all coal-fired power plants will also need to be shut down by the end of 2024.

Yet climate change presents increasing challenges for energy production and delivery, including:

Wind, solar, and hydropower energy – which are the main renewable energy sources used at the current time – are susceptible to fluctuating weather patterns. They rely on climate-related factors such as sunlight, wind speed, and the availability of water. This has implications for the reliability and performance of the energy system.

Deliang Chen, professor of physical meteorology at the University of Gothenburg, notes:

“Their capacity is highly dependent on weather conditions, which makes their share in the existing energy system something of a challenge when it comes to reliability and stability.”

Extreme weather events present increasing challenges for the generation and storage of solar energy. Freak storms can cause significant damage to solar panels and disrupt the supply of renewable energy, which is an ongoing challenge for the industry.

Australia has the highest average solar radiation per square metre of any continent in the world, with more than five gigawatts of solar photovoltaic panels. However, those panels weren’t able to withstand the might of giant hail when it rained from the sky in a severe storm in October 2020.

Giant hail is not the only extreme weather event that can damage solar panels and infrastructure. Fires, lightning, extreme winds (and sand and dust deposits from these winds), and heatwaves can reduce power output. If solar panels reach temperatures exceeding 149 °F then they’re likely to start losing efficiency.

Even an increase in cloudiness can cause problems for solar power generation. On a partly cloudy day, production can drop by 10% to 25%, costing solar operators more than $5.25 billion a year.

An increase in global temperature could:

Solar power is vulnerable to water supply and changes in rainfall caused by heatwaves or droughts. As solar plants are normally located in dry areas, they use wet cooling systems, which need a significant amount of water to run efficiently.

Solar power generation can also be unreliable. This means the storage of solar energy is key to successfully scaling up this energy source globally. The challenge is to correctly balance the supply of solar with the demand for energy from consumers. This requires a deep understanding of historical weather data.

Wind power in the US has more than tripled over the last decade and is now the biggest source of renewable energy in the country. It generates 7.9% of the country’s electricity and more than 20% of the electricity in six states.

You might think that strong winds would benefit the production of wind power, but this is not necessarily the case. The Office of Energy Efficiency & Renewable Energy explains,

“Every wind turbine has an anemometer that measures wind speed and a wind vane to keep track of the wind’s direction. When the anemometer registers wind speeds higher than 55 mph (cut-out speed varies by turbine), it triggers the wind turbine to automatically shut off.” 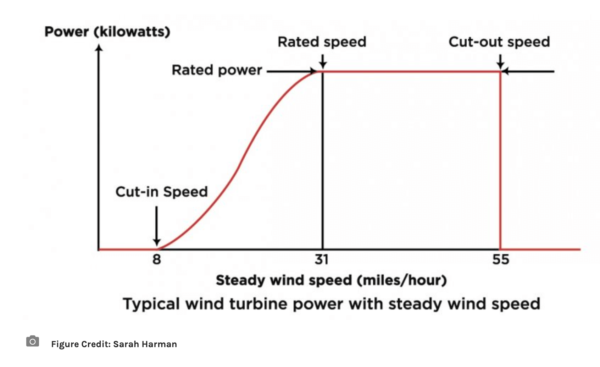 Extreme wind speeds, especially when there are direction changes, gusts, and shears can:

It’s not just hurricanes that threaten wind operations. During Winter Storm Stella in 2017, the five turbines installed at Block Island Wind Farm –– the first US offshore wind farm –– shut down when winds reached more than 55 mph. 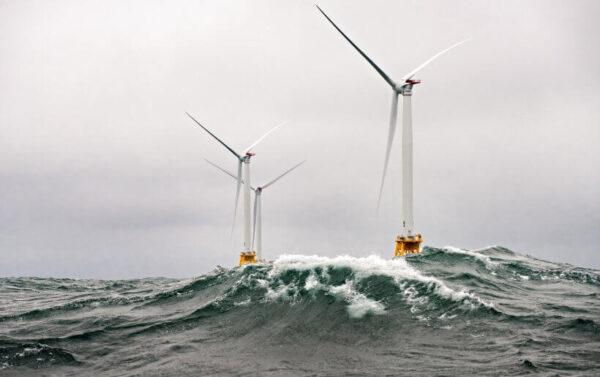 Research from the University of Colorado suggests that current wind turbines are not prepared for a Category 5 storm.

At the same time. low winds also mean wind turbines aren’t able to operate correctly. On the flip side, storms can have a positive effect on the generation of wind power, as the production of electricity rises sharply before turbines shut off. In the UK, Storm Bella not only brought gusts of up to 100mph on Boxing Day 2020, wind power also provided more than half of its electricity that day.

🌬 For the first time ever yesterday, amid #StormBella, more than half of Great Britain’s #electricity was generated by the #wind
☔️ 5️⃣0️⃣.6️⃣7️⃣% of power was produced by wind turbines
⚡️ Previous record of 50% set on 21 August
👉🏾 https://t.co/otBFE9zO46 (👀 by @I__like__eggs) pic.twitter.com/yEU4mdRf50

In early 2020 during storm Sabine, more than 60% of Germany’s electricity supply was provided by wind energy.

Aside from extreme wind, even small alterations in weather from climate change and other factors put pressure on generation and supply.

A rise in temperature could increase operational costs and affect the efficiency of the equipment. Changes in daily or seasonal distribution of wind affect profitability as it’s more difficult to match wind energy input to the grid and daily load demand.

Gaining a greater understanding of climate and weather, and what interruptions they may cause, as well as what wind power resources will be available when can help ensure the smooth running of operations, even with seasonal variability.

If we can more accurately predict output, then we can avoid costly overproduction and coordinate the use of different energy sources better.

The United States is the fourth-largest producer of hydropower in the world, and hydropower operational costs are relatively low, which makes it an attractive energy source.

Changes in weather patterns can affect the hydrologic cycle (the movement of water over the earth) that underpins hydropower. Hydropower production is dependent on precipitation leading to water in rivers and in hydropower reservoirs. As such, this renewable energy is at the mercy of more extreme weather events, such as droughts and floods, which have been increasing significantly in recent years.

In a severe drought, electricity generation levels can drop as much as 88% while flooding can overwhelm and damage the transformer and electrical equipment within hydro systems. This can cost up to $10,000 to repair. 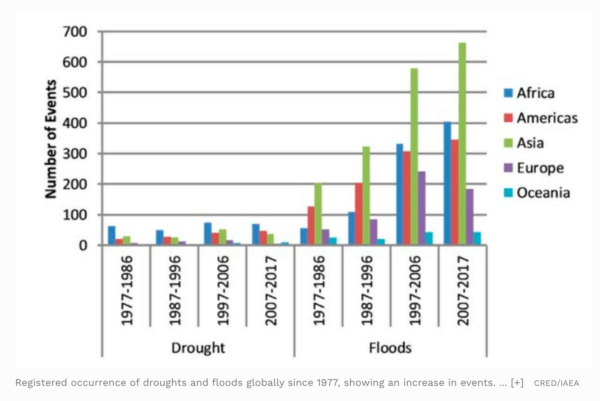 A drought in Indonesia in 2011 reduced generating capacity in two hydroelectric power plants, which led to estimated financial losses of $51.5 million.

The decreasing volume and increasing temperatures of rivers and lakes caused by changing precipitation and warming poses problems when it comes to cooling efficiency and water availability.

It’s important to mitigate these weather events as a whole through better forecasting and making good use of data.

Predicting the Future with Weather Intelligence

Moving from fossil fuels to renewable energy makes it even more important for energy producers to get accurate information about historical, current, and future weather. Often power producers have been reactionary when it comes to adverse weather conditions, and need to respond faster and more proactively.

As the first 12 to 24 hours during and after a weather event are the most important, it’s important to be able to know when the event is coming, where it will hit, predict the damage, and prepare a response. This helps to:

Being able to provide reliable, consistent renewable energy is key, and sudden drops or surges in supply can destabilize the grid.

After a partial solar eclipse in 2015, German grid operators had to balance out a 2,674-megawatt fall and a 4,111-megawatt rise in solar power within the 15-minute slots that the electricity exchange works on. Using weather forecasts, operators were able to predict the fluctuation of solar power production, prepare for the event, and keep the grid stable.

Being able to predict the future with weather intelligence software that uses long-range and hyper-local forecasts can ensure a reliable supply of energy and stabilize prices.

“Having information about how hot, cold, humid, dry or windy the upcoming season will be can be critical for estimating how high or low both power demand and renewable power production will be that season.”

Both everyday weather conditions and extreme weather events can have a huge impact on energy production and the bottom line. Whether it’s damage to expensive equipment or lost energy production from a storm, the weather is constantly costing you money.

That’s why your renewable energy business needs weather intelligence to provide accurate and actionable weather data to power your operations.

You can’t ignore the risks posed by not understanding and proactively managing weather conditions. That’s why every renewable company should invest in a weather intelligence solution.

Tomorrow.io’s weather intelligence solution provides 24/7 hyperlocal minute-by-minute insights for historical, real-time, and forecasted weather impact. You can see exactly when, where, and how the weather will impact your company.

These forecasts help you become aware of the risk of disruption and damage from storms and flooding at an earlier stage, enabling you to better prepare.

Take SB Energy, a Japanese wholly-owned subsidiary of SoftBank Group, as an example. The company uses historical forecasts to train their AI model to predict future solar power generation, as well as Tomorrow.io CBAM operational forecast, with the same model specifications as the historical forecast.

By understanding the historical forecast and then using the same forecast model, they can more accurately predict the amount of energy likely to be generated not only by their own solar plants, but also by smaller solar providers across the region.

With that data, SB Energy can better optimize the aggregated load to enable optimization of the grid network. The company can help Japanese utilities, power producers, and suppliers to better understand how much renewable energy will be produced from the small and residential solar to the grid. They can then correctly balance the supply of solar with the demand for energy from consumers and better optimize other sources of energy.

Stay Ahead of the Weather

As the most commonly used renewable energy sources all depend on the weather, there are unique challenges when it comes to maintaining supply and demand and ensuring a stable grid. Weather intelligence takes the guesswork out of renewable energy production by delivering deep historical data, powerful forecasting, and a dashboard for easy operational decision-making. 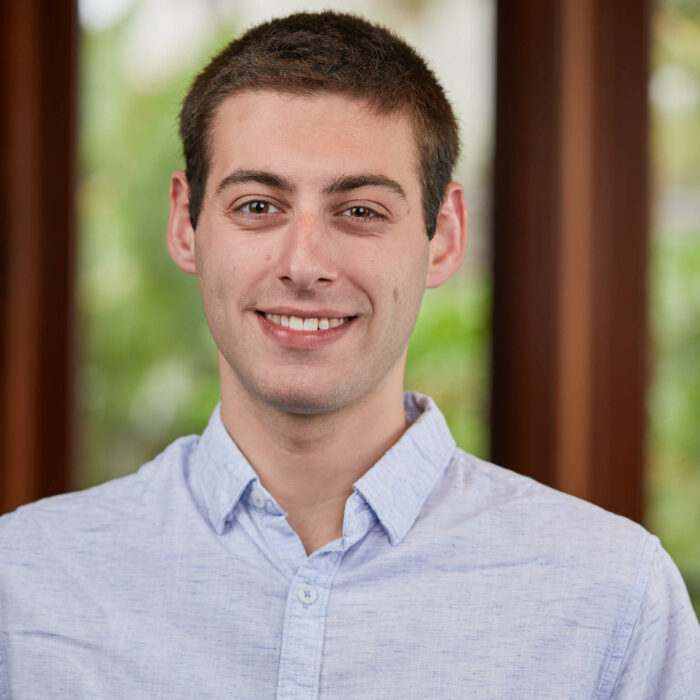 Josh Cohen is the Energy Product Marketing Manager at Tomorrow.io. He previously worked at Borrego as a Product Manager. When he isn’t consuming energy technology news you can probably find him rock climbing.

Josh Cohen is the Energy Product Marketing Manager at Tomorrow.io. He previously worked at Borrego as a Product Manager. When he isn’t consuming energy technology news you can probably find him rock climbing.