What’s the Weather Forecast for the SpaceX Splashdown Sunday?

The forecast for the splashdown on Sunday remains questionable, but has improved.

As Hurricane Isaias approaches The Bahamas, it will continue northwestward, parallel to the Florida coast Saturday night through Sunday night. This will impact the potential splashdown sites off Cape Canaveral and Daytona on Sunday afternoon with tropical storm to hurricane conditions. Farther north, hurricane conditions hold off until Saturday night into Sunday, however winds and waves will both exceed criteria for a successful splashdown. All three Atlantic sites are unlikely to meet the criteria for a splashdown.

There is a more favorable weather forecast for the potential splashdown sites in the Gulf of Mexico. Dry weather, fair skies, and no significant waves should occur during the planned splashdown time Sunday afternoon. However, the wind criteria may not be met at the potential splashdown site offshore from Tampa, where 15-25 mph winds appear possible. Winds generally decrease to the northwest, however, so the most favorable splashdown sites appear to be offshore from Pensacola and Panama City. For these locations, there should be dry weather, fair skies/seas, and winds generally at or below the criteria of 10 mph.

Now, it’s time for the NASA astronauts to return from the International Space Station back home to Earth. This will be a historic event: it’s the first time in 45 years that an American astronaut has returned via splashdown — landing a spacecraft by parachute into the ocean.

It’s no surprise that the weather will have a major impact on the success of the splashdown, and there’s a LOT that could go wrong.

Back in May, the risk of a lightning strike forced NASA to suspend the launch just 16 minutes before the Falcon 9 rocket and Crew Dragon spacecraft was set to take off. For the second launch attempt on May 30, Tomorrow.io forecast the weather would stay clear and the launch would go off without a hitch — and we were right!

So what’s the forecast? Unfortunately, it’s not looking good.

NASA and SpaceX are targeting 7:34 PM Saturday evening to undock the Dragon spacecraft from the space station and start the return trip. This means the splashdown is planned for exactly 2:42 PM on Sunday, Aug. 2.

However, the quickly developing Hurricane Isaias is arriving in Florida this weekend as well. Here’s how the storm could impact the SpaceX and NASA splashdown on Sunday.

The Weather Needed for a Successful Splashdown

At exactly 48 hours prior to splashdown, SpaceX and NASA will together decide whether or not the capsule will depart based on the weather at the primary and alternate splashdown sites — all of which are located around the coast of Florida.

For a successful splashdown, there are a number of weather criteria that must be met in order for the astronauts to return safely to Earth. According to NASA, the specific criteria for splashdown are:

In the past, NASA has had to alter a planned splashdown because of difficult weather conditions. For example, for the recovery of the 1969 Apollo 11 mission, NASA had to adjust the trajectory of the reentry to avoid a storm and land astronauts safely. There is always a potential for this type of last minute adjustment or change.

Unfortunately, Hurricane Isaias is currently on a path to impact the Florida peninsula Saturday night into Sunday morning, almost at the exact time of the projected splashdown. 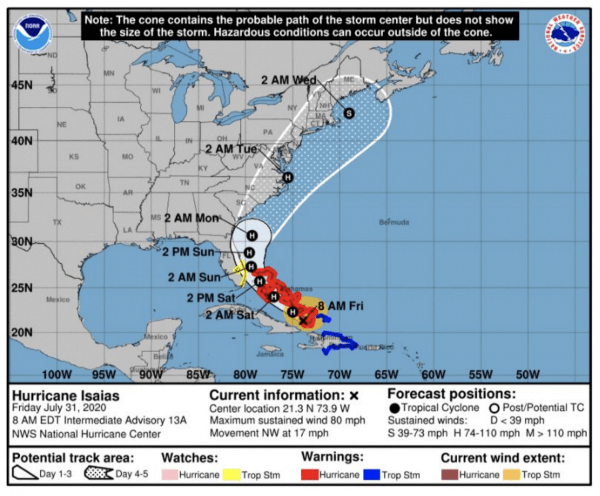 NOAA Forecast as of July 31

Because of this, mission forecasters will have to make the call on which of the seven potential sites will offer the best chance for a successful landing Sunday afternoon. They’re likely looking at a weather intelligence dashboard similar to this one to make that decision. 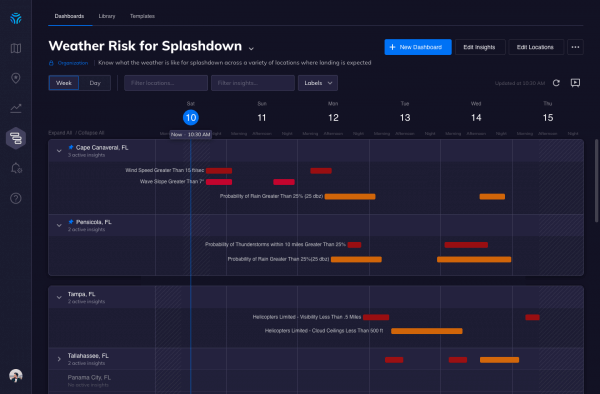 So what’s the forecast? There are two possibilities.

Weather on the Atlantic Side

Three of the possible sites are on the Atlantic side of the Florida Peninsula — from Northeast of Jacksonville to East of Daytona to near Cape Canaveral.

Winds associated with the circulation from Hurricane Isaias will likely exceed the maximum 10 mph or less needed in the splashdown zone, and seas churned up by the storm will probably create waves higher than the 7 degree slope. 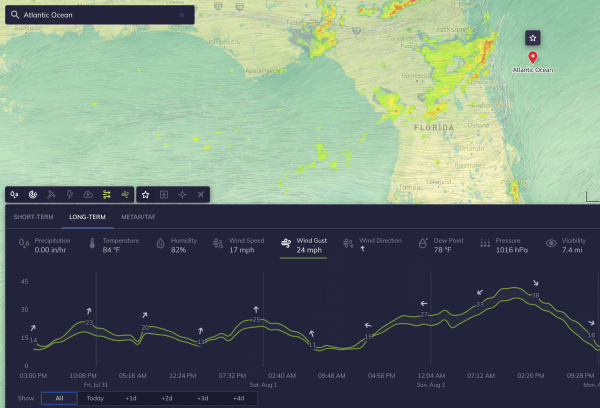 The possibility of clouds and rain bands around the edges of the hurricane also make the three Atlantic sites unattractive for splashdown and recovery, though some of these areas could be clearing out by Sunday afternoon.

Even as the hurricane pulls away to the Northeast late Sunday, the chance of rainfall exceeding 25 dBz on radar may not remain below 25% if there are any tropical rain bands in the area. Heavier squalls within rain bands could also reduce visibility under 1/2 mile at times.

Weather on the Gulf Side

For the other four sites in the Gulf of Mexico, the weather at the surface looks much better. The probability of clouds and rain is rather low. In fact, sinking air along the far western edge of the hurricane is more likely to result in mostly clear skies and low probability of precipitation for the Gulf coast sites.

Seas and wave heights should also be calmer here. Wind speeds could still be an issue though, with wind speeds as high as 18 to 20 mph predicted for Sunday afternoon in the northern Gulf of Mexico. This means the sites offshore from Pensacola, Panama City, and Tallahassee may not be able to meet the requirement for winds to stay 10 miles per hour or less in the splashdown zone. 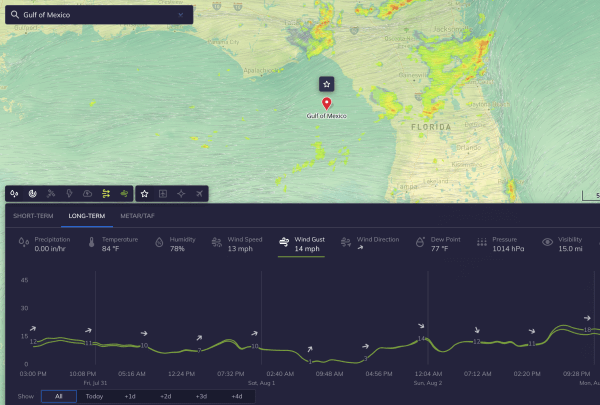 The site west of Tampa may be closer to the center of high pressure over the Gulf of Mexico and may see slightly weaker winds closer to 10 mph. This spot could end up being the most likely of all the Gulf locations to meet the weather criteria for splashdown and recovery criteria.

Overall, the weather is looking challenging for the planned splashdown. If the splashdown does occur, it will more likely be on the Gulf side of Florida. However, we don’t yet know the broader impact of the storm on the region. It could force NASA to reschedule the splashdown until after Hurricane Isaias has passed. We’ll learn more in the coming days, and NASA will make their call 48 hours in advance.

Want to learn more about the original SpaceX launch? Read our post on how weather got the way of the launch back in May.