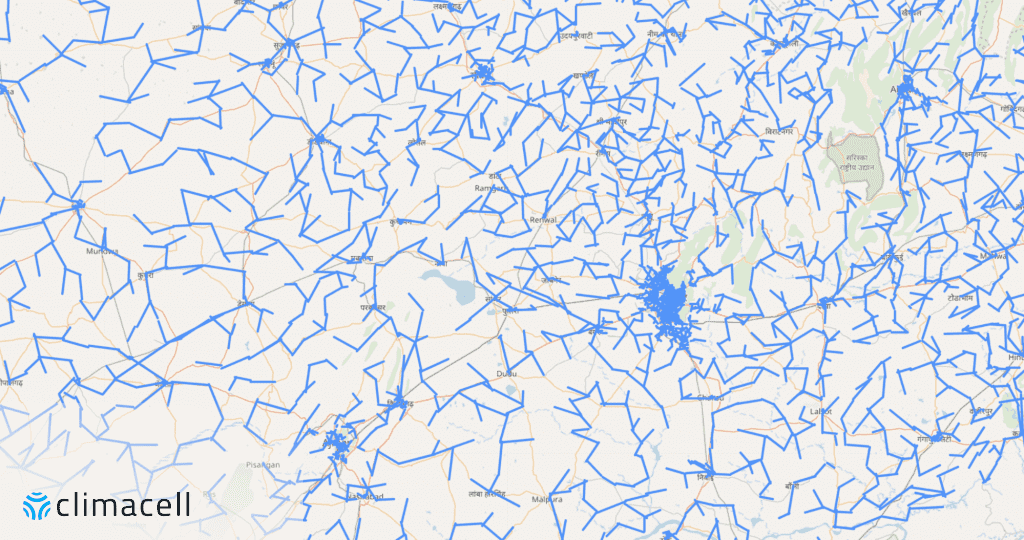 See For Yourself: Virtual Sensors Vs. Government Weather Stations

Traditional weather forecasts are dependent on the government and the priorities they want to invest in. These investments, in infrastructure and hardware, are prohibitively expensive and are only rarely deployed by the governments of developing countries that need accurate weather information the most.

The limitations of government weather stations is the exact starting off point for virtual weather sensors.

Turning Our Connected World Into Millions of Sensors

To address the shortcomings of public data from government entities, Tomorrow.io has developed a unique way to create data the likes of which the world has never seen. This approach results in a hyper accurate, location specific, continuously updated view of the weather. Since Tomorrow.io’s patented MicroWeather technology engine doesn’t require expensive investments in infrastructure and hardware, it can be quickly deployed anywhere.

Great idea. But does it work? Yes, a healthy dose of skepticism is a good thing.

If you’re familiar with the web of connected devices known as the Internet of Things, Tomorrow.io technology is based on a similar approach to our connected world.

The guiding principle is that if weather impacts virtually every aspect of our lives, every electronic source can potentially be turned into a weather sensor. This new layer of data is combined with traditional data sources to create the most timely, accurate and location-specific insights about the weather ever.

2. Compare and Contrast I: Indian Meteorological Department Vs. Tomorrow.io

Here’s that same comparison, weather stations versus cell towers, focused this time on Mumbai, a city of 19 million people:

See how a rain event occurring over Boston is captured by NEXRAD, the radar system operated by the NOAA, in comparison to Tomorrow.io:

What you’ve just seen in the images above are the best that government weather tools and data can offer. Many radars outside of the developed world don’t even work most of the time, mainly as a result of prohibitive costs and poor maintenance.

The Limits of Radar: What Makes Virtual Sensing So Much More Accurate?

Radars shoot beams into the sky, capturing precipitation occurring at several thousand feet above the ground – not usually an accurate representation of what’s going on at surface level. Microwave links, by contrast, function as point-to-point radars, with beams running very close to the surface – from rooftops, where cellular antennas are located- so they capture the precipitation that actually reaches the ground.

Another difference is the spatial resolution, the size of each pixel. Radar’s resolution is typically around 2 km, about the size of a quarter of Boston. But when you add hundreds of new sensors, roughly the number of cell towers in a city Boston’s size, you can reconstruct precipitation maps at a much higher resolution.

Seeing is Believing: Virtual Weather Sensors Are For Real

In 2018 extreme weather cost at least 5,000 lives and put 28.9 million in need of emergency aid. The good news is that Tomorrow.io is able to transform big weather data into practical information that people around the world can use to stay safe in a volatile climate. Such images as those you saw above prove that virtual sensors have massive advantages over traditional weather approaches.

Tomorrow.io has taken a revolutionary idea and turned it into a reality. By gathering and then mapping the world’s data, Tomorrow.io is offering hope where before there was only luck.

Read more on how Tomorrow.io is “Turning Weather into Opportunity: Using Weather-of-Things Data to Create Pathways from Poverty to Prosperity”