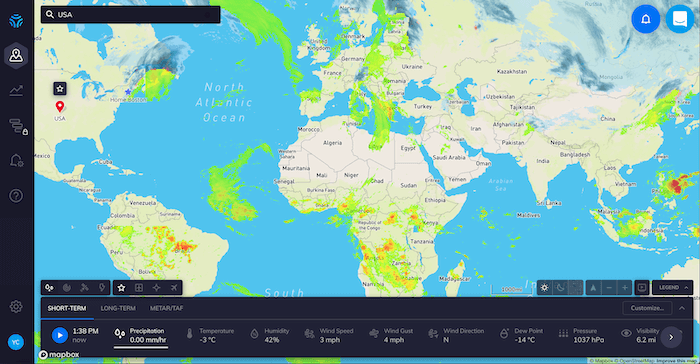 Precipitation of any type impacts our lives. Too much rain in a short period of time leads to flash floods; too little rain results in droughts and famines. Meanwhile, freezing rain and snow can cause a slew of additional hazards. Climate change is at least partly responsible for what we’re increasingly observing around the world: altering global rainfall patterns. Many scientists believe that aggressive weather trends are tied to climate change and will continue to get worse as the planet continues to warm.

Such climatic changes as shifting rainfall patterns are leaving industries scrambling to adapt. After all, rainfall isn’t only a part of the world ecosystem, it also affects our global economy.

As such, knowing where and when there will be precipitation makes it possible to  optimize energy production, enhance disaster response mechanisms, and improve forecasting models. As a result, accurate and timely precipitation information directly benefits the world economy, society and, ultimately, save lives.

Why Gauge Precipitation From Space?

When it comes to measuring precipitation, rain gauge and radar observations provide us with official ground truth. However, automated observation sites and manned weather stations require tremendous resources to coordinate. As an alternative, it’s possible to remotely monitor precipitation using radars, but such systems are also expensive to operate and maintain. Also, these traditional weather tools leave significant gaps in instrument coverage over oceans, where some of the most devastating weather systems originate.

Above the clouds, satellite is the ideal platform to measure rain, snow, and track storms continuously.

How Do Satellites Measure Precipitation?

Remote sensing is the science of measuring physical properties from a distance. There are two types of remote sensing, active and passive. Active sensors emit a pulse of electromagnetic radiation and detect the radiation reflected by the target, while passive sensors measure the reflected/emitted energy from the target. Satellites can carry different instruments that detect radiation at a broad spectrum, in either an active or passive setting, depending on their size, orbit, and mission.

Passive remote sensing often uses microwave and infrared (IR) wavelengths to measure precipitation. Microwave sensors can see through the cloud, and measure the energy naturally emitted by raindrops, yielding a direct rain rate estimate. On the other hand, IR measurements can see just the cloud top. Assuming a simple relationship (not always true, like with cirrus clouds) between cloud top height and convective activity, one can thus infer the rain rate near the surface.

Microwave sensors are typically placed on satellites in a low earth orbit (LEO) to resolve more details, while infrared sensors are placed in the geostationary orbit (GEO). However, LEO satellites scan a much smaller area (swath) than GEO satellites. They require multiple orbits to cover the whole globe. A complete monitoring system involves a constellation of LEO and GEO satellites to optimize spatial and temporal coverage.

The GPM mission is an international collaboration between NASA and multiple space agencies to provide global observations of rain and snow. The GPM Core Observatory satellite has a passive microwave imager (GMI) and a first-of-its-kind space-born dual-frequency precipitation radar (DPR). The DPR measures 3D precipitation structure. Its simultaneous measurements with GMI provide valuable information on cloud microphysics. They can be used to calibrate passive microwave measurements, made by the GMI and other partner satellites.

The result is the Integrated Multi-satellitE Retrievals for GPM (IMERG) The algorithm has three steps:

For each observation time, the system runs multiple times. Three runs are available for different scientific objectives with varying levels of calibration and accuracy:

Timeliness is the key. Expecting and preparing for inclement weather can sometimes become matters of life-and-death. Here at Tomorrow.io, we want to deliver near-real-time weather information to every corner of the world, and we won’t settle for a 4-hour latency period. Instead of using Microwave precipitation measurements from LEO, we look deeper into space: the IR measurements from Geostationary satellites.

Geostationary satellites rotate with the Earth, always pointing to the same locations on the surface. With only five satellites centered at different longitudes, we can cover the globe. The sensors on the state-of-the-art geostationary satellites can return a full-disk scan at a frequency as high as 10 minutes. This capability allows us to monitor weather systems in a continuous fashion.

One major drawback is the accuracy of the IR-brightness temperature to precipitation rate conversion. As mentioned above, IR cannot penetrate the clouds and only estimates cloud top heights as a proxy of convective activity. Other factors such as cloud texture, moisture availability, and surface topography need to be taken into account to better estimate precipitation rates. Some of these corrections can be achieved by leveraging outputs from weather forecast models, which help us understand the 3D atmosphere even in very remote locations.

We set up our satellite feeds and post-processing pipeline. It processes and merges full-disk scans from five satellites (GOES-16, GOES-17, Himawari, Meteosat-8, and Meteosat-11) to provide a global precipitation rate estimate every 15 minutes, with a latency period of less than 20 minutes. This merged map serves as the initial estimate, and is later calibrated using machine learning algorithms against the ground-based radar observations., We then integrate this map with our proprietary precipitation estimates derived from vast networks of terrestrial microwave links, to present a more granular, holistic picture of rainfall in near real-time.