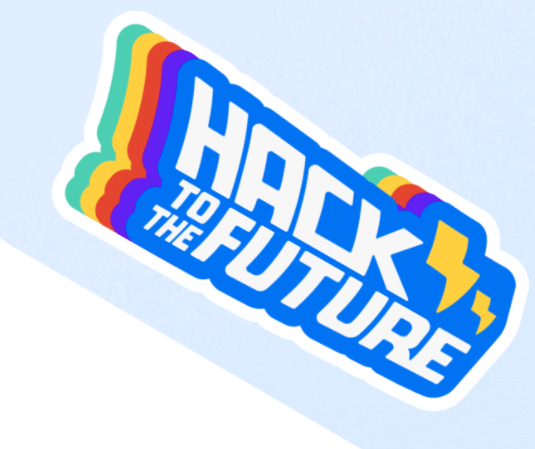 Tomorrow.io Completes The Greatest Hack to the Future Ever

Honestly, the video says it all so start by watching this Hollywood masterpiece

But hey, let’s recap anyway! The Tomorrow.io team recently completed the first company hackathon of 2020 and the end result was more than we ever could have expected. We wanted to pull back the curtain to share all the details (except for the super secret projects that were completed, those will be unveiled in the coming weeks and months).

Here at Tomorrow.io, we have a small obsession with the movie Back to the Future, which seemed like the perfect backdrop for our hackathon with a Hack to the Future theme!

The first thing we did was a call for ideas from all across the company:

In total, more than 50 ideas were submitted with at least 1 idea coming from every single department and office all across the world.

Goal of Hack to the Future:

We’re a competitive bunch here at Tomorrow.io. We love to compete, so making sure everyone was informed and on the same page about the goals, rules, and scoring right from the start was a must-have for our team. The requirements for Hack to the Future were that each team would have 24 hours to complete their project, which was tricky with so many time zones, but we made it happen with a rigorous schedule beginning on 6/16/20:

As for our esteemed judges, we were fortunate to included both internal and external folks from an array of backgrounds and professional expertise:

At the close of the 24 hour hackathon, teams would move directly into presentation mode to our group of judges. We decided to go “VC pitch meets Shark Tank” style for our team presentations:

After careful consideration and debate across 50+ project ideas, we finalized a core group of 8 hackathon teams to lead project builds. Our teams were all a mix of different offices and departments, some with exceptionally clever names and even logos! 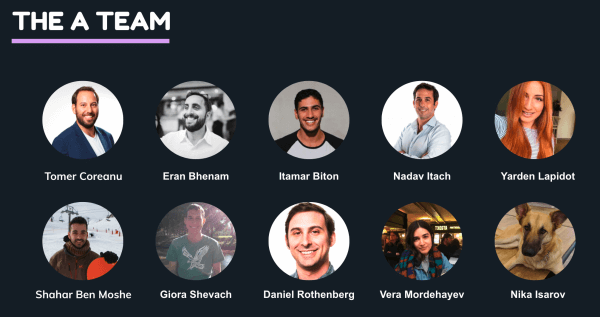 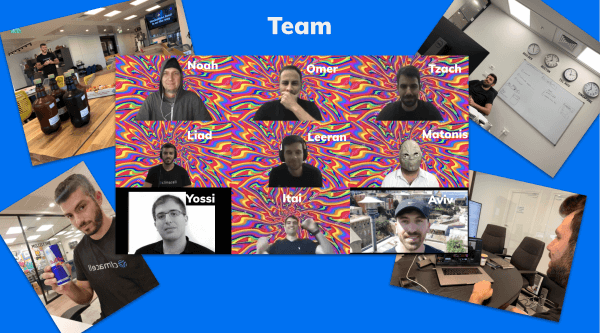 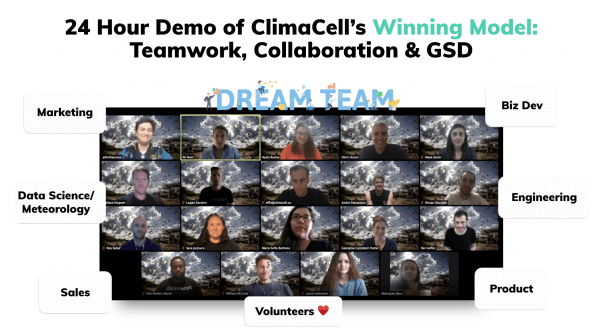 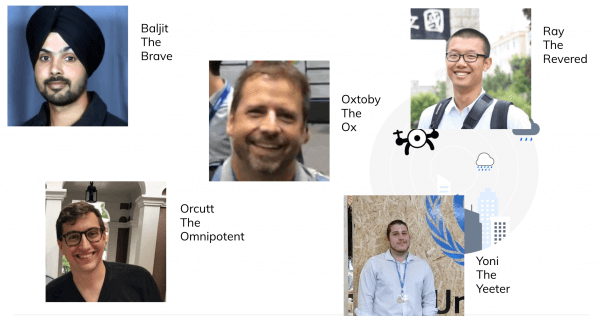 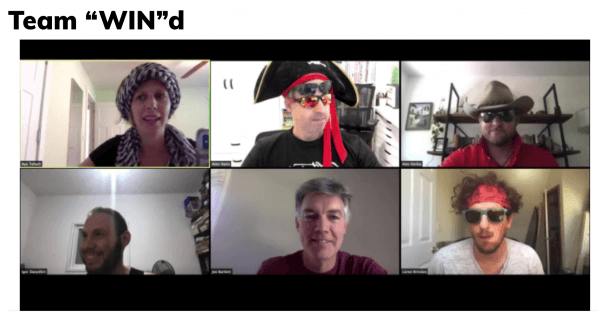 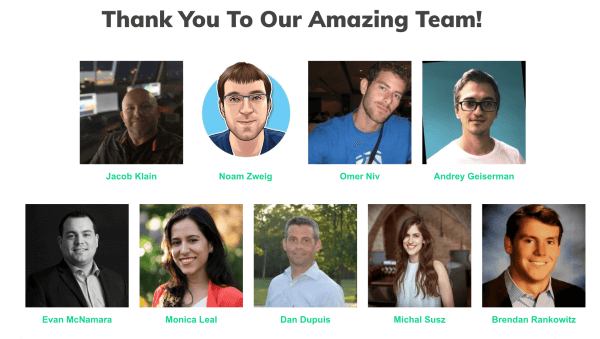 Again, we can’t get into details just yet as to what super secret crazy high growth moonshot ideas were completed, but they are awesome and we can’t wait to do an official announcement launch for each in the coming weeks and months.

So you’d think a 24 hour hackathon is pretty straightforward, right? Pick a project, assemble a team, assign responsibilities and build…Not at Tomorrow.io, oh no. Hack to the Future wasn’t just your standard hackathon, it was full of surprising team challenges that popped up out of nowhere throughout the 24 hours with rewards going to the participating and winning teams. What kind of challenges were proposed to our teams during the hackathon you ask? Here are a couple!

Challenge 1: Create a Zoom chain link. A what? Check out a few examples:

Challenge 2: Plank challenge! Congrats to Itamar, who held a plank for 3+ minutes

And these weren’t the only challenges, the night was filled with plenty more to keep every team on their toes!

We are blessed to have such a thoughtful and detail oriented people and operations team here at Tomorrow.io, and they went out of their way to make sure the hackathon was full of fun surprises. First, the teams sent out a bunch of energizing and prep videos before the hackathon started, like this energy drink video:

Second, we had tons of encouragement from people like Sloane Stephens. Oh hey 2017 US Open Champion, thanks for cheering us on! (Even cooler since the US Open is a Tomorrow.io customer).

Third, people need to eat during a hackathon, so the team made sure everybody that was working from home received a pizza delivery. THAT’S CRAZY. Can you imagine coordinating and ordering delivery for 70+ people on 4 different continents??? Yep, they did it. Well played team, well played. Everyone was amazed when their doorbells rang and there was pizza waiting for them. 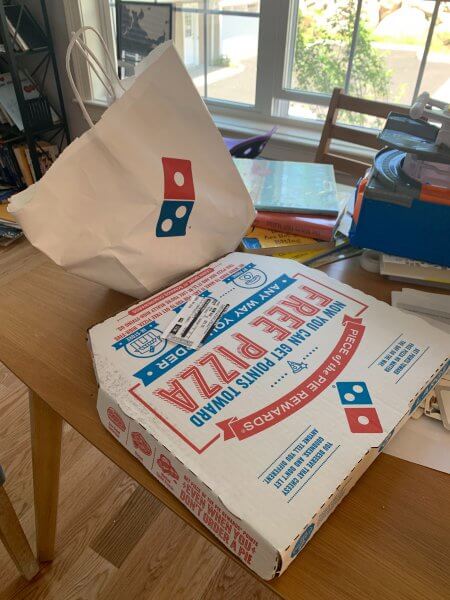 For those working in one of our offices, food was also delivered promptly on time: 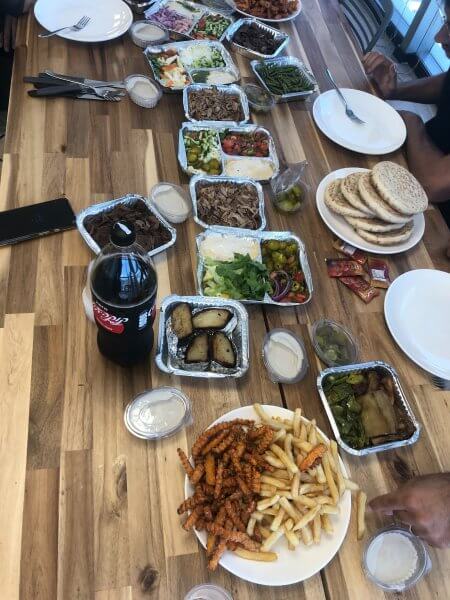 Every team was elite during Hack to the Future. People stayed up all night, sacrificed time and energy and at the the end of the day there was so much value created for the company it’s incredible. In third place was Team Breeze Factory, nice job team! In second place was Team Locusts, incredible final delivery!

But in the end there can be only one champion, so a huge congratulations to TEAM WEATHER TOGETHER, the winning team consisting of:

Trust us, it’s a BIG idea that’s going to have a massive impact here at Tomorrow.io. Congrats to the winning team and we look forward to etching your names into the Tomorrow.io Hackathon Winners Plaque: 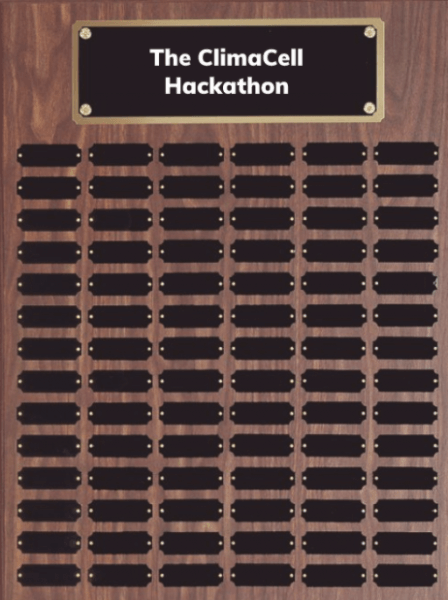 Absolutely amazing. Thank you so much to everyone involved in planning this truly memorable and impactful event. Hackathons are meant to be competitive and push the envelope, but they’re also such a special moment in time where people meet each other sometimes for the first time, work with departments they normally don’t get to interact with, and truly enjoy the caliber of people all across Tomorrow.io.

Now for the big question…will there be more hackathons here at Tomorrow.io? All signs point to yes, and as one Tomorrow.ioer said this morning…“at the next hackathon we won’t let the fame and glory of 1st place slip away, so stay tuned and stay sharp 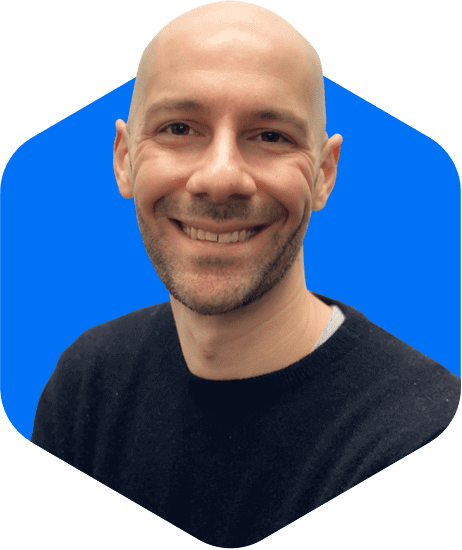