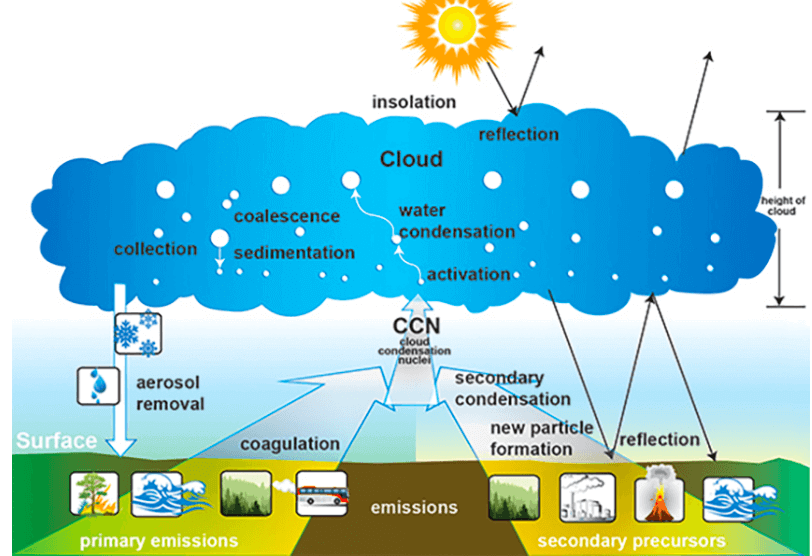 Tomorrow.io’s Director of Meteorology Published in Atmospheric Chemistry and Physics

Particles matter, especially when airborne. Whether emitted from artificial sources such as power plants and internal combustion engines, or natural sources such as volcanic eruptions, airborne particulates or aerosols not only impact human health but also the global climate. The more particles emitted into the atmosphere, the more water droplets are likely to form around those particles inside clouds. Clouds with more droplets are thicker and brighter, so they reflect more solar radiation, thereby cooling the climate system in a process called the aerosol indirect effect. While much is known about the physics of how aerosols impact cloud formation, it’s hard to measure just how big a role the indirect effect plays in offsetting global warming. Today’s estimates of the magnitude of the indirect effect are highly uncertain; it may well have masked as much as 80 percent of warming during the 20th century due to carbon dioxide (CO2) emissions alone.

Lowering that uncertainty will become critical throughout this century if more and more countries significantly reduce their greenhouse gas (GHG) emissions in pursuit of the Paris Agreement’s goal of keeping the rise in global mean surface temperature since preindustrial times to well below 2 degrees Celsius. Any major cut in airborne particulates will reduce the indirect cooling effect considerably, resulting in additional warming that climate models will need to estimate as precisely as possible.

To help meet this challenge, Daniel Rothenberg, who until recently served as a research assistant at the MIT Joint Program on the Science and Policy of Global Change and a PhD student and postdoctoral fellow in the Department of Earth, Atmospheric and Planetary Sciences, has developed concepts and software aimed at reducing the uncertainty in the magnitude of the indirect effect.

Key to achieving this goal is to more precisely represent aerosol activation, the process by which aerosols form water droplets in clouds, in climate models. During this process, individual aerosol particles becomes cloud droplets, the building blocks out of which clouds are formed. Just as dew condenses on grass and leaves on a cold morning, water vapor in the atmosphere condenses onto airborne particulates. Now, in a new study in the journal Atmospheric Chemistry and Physics, Rothenberg—in collaboration with his PhD advisor, Joint Program Senior Research Scientist Chien Wang, and Alexander Avramov of Emory University (a former postdoctoral associate at the MIT Center for Global Change Science)—advances a method that represents aerosol activation with far greater accuracy and computational efficiency than existing approaches.

In the study Rothenberg and his co-authors incorporated a sub-model of the physics of aerosol-cloud interaction that represents aerosol activation into a widely used climate model called the Community Earth Systems Model (CESM). Drawing on research that pinpoints which particles tend to form cloud droplets, the sub-model projects how many cloud droplets form based on the level and type of ambient pollution.

To computationally represent aerosol activation requires much higher resolution than what is commonly used in Earth system models. Existing methods either oversimplify the process or are very computationally time-consuming and expensive to run. To overcome this challenge, Rothenberg designed his sub-model as a fast, inexpensive emulator that effectively mimics the behavior of a more detailed aerosol activation model. In the study, he and his co-authors compared the emulator’s performance within CESM with that of other state-of-the-art aerosol activation models in quantifying the aerosol indirect effect over time for a range of aerosol types. The researchers also benchmarked the models’ results against satellite and in situ observations obtained from around the globe.

As it turned out, Rothenberg’s aerosol activation sub-model outperformed the others in terms of speed, cost and agreement with satellite observations.

“Daniel’s method is more accurate than current, very expensive models, as it directly emulates a very sophisticated model,” says Wang. “It’s super-fast, highly computationally efficient and accurate for only a fraction of the cost and runtime, and represents a significant step forward in climate modeling.”

Supported by funding from the National Science Foundation and developed in consultation with Wang and other prominent atmospheric scientists, Rothenberg’s aerosol activation sub-model was described earlier in a paper he co-authored with Wang in the Journal of the Atmospheric Sciences and in his PhD thesis. It’s unique among aerosol-cloud physics models in its focus on aerosol activation and its impact on climate.

“How you represent how aerosols influence clouds—the fundamental aerosol activation process—contributes a huge amount of uncertainty to the aerosol indirect effect,” says Rothenberg. “This ends up being a very big lever you can pull on your model, to make it either much more or less sensitive to aerosol pollution.”