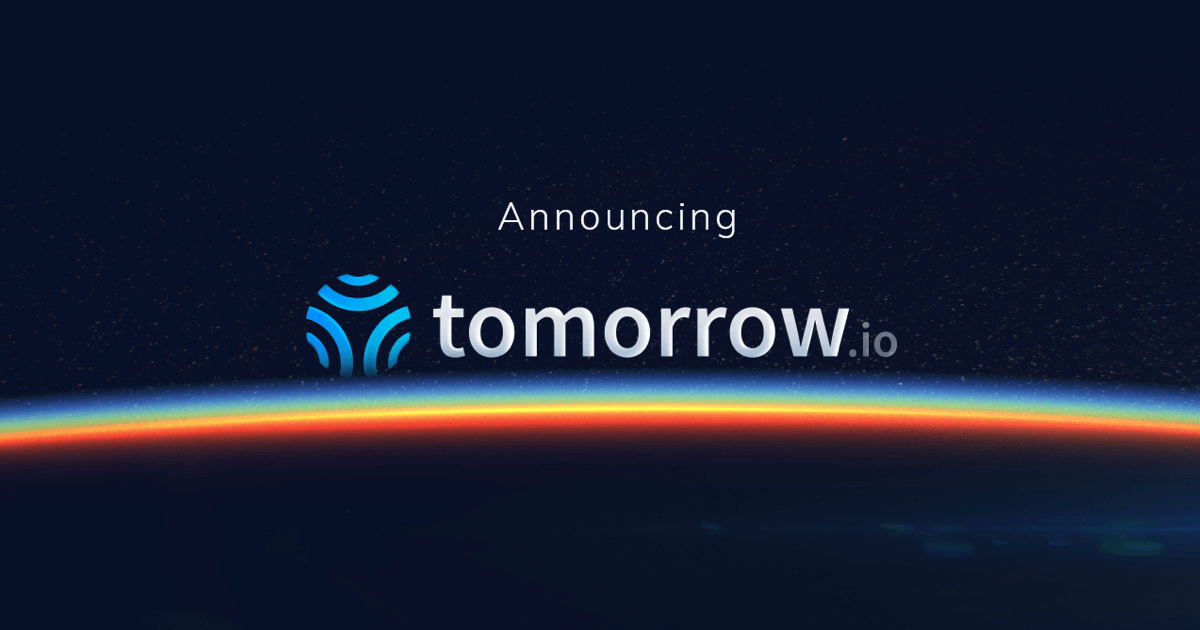 ClimaCell has changed its name to Tomorrow.io and raised new funding to accelerate SaaS growth and space operations

Boston, Mass. March 30 2021 – ​Today Tomorrow.io, the world’s leading weather intelligence platform is excited to announce its new funding round led by Stonecourt Capital and joined by Highline Capital, bringing total funding raised to more than $185 million. The company is also changing its name from ClimaCell to Tomorrow.io.

“We are thrilled to be partnering with Stonecourt Capital to continue executing on our complete disruption of the $4 trillion global weather, air quality, and climate-risk industry,” said Shimon Elkabetz, CEO and Co-Founder of Tomorrow.io. “CEOs should think of weather intelligence like they think of cybersecurity. Climate change impact on business, governments, and people is real and here, and the vision we are executing on at Tomorrow.io – including our recent space announcement – is shared by the leadership at Stonecourt Capital, and we are fortunate to be working alongside their team.”

In February 2021, Tomorrow.io announced Operation Tomorrow Space. The company is building the first-of-its-kind proprietary satellites equipped with radar, and launching them into space to improve weather monitoring and forecasting capabilities. The breakthrough technology represents a once-in-a-generation opportunity with decades of value on the horizon.

Tomorrow.io has been in hypergrowth mode since launching 5 years ago. Having expanded operations across North America, LATAM, EMEA, and APAC, the company brought its product offerings to market 2 years ago and has already achieved a 200% net revenue retention rate and 850% ACV growth during the past 2 years.

“While the company’s growth has been tremendous since launch, there is a larger opportunity at play here,” said Rick Davis, Partner at Stonecourt Capital. “What Tomorrow.io is building, corroborated by their recent announcement of launching radar-equipped satellites into space, is only further proof that this company represents the future of weather forecasting for the entire planet. The privatization of the weather industry is now, and that type of vision is what compels the team here at Stonecourt Capital.”

With customers including Uber, Ford, Delta, National Grid, and more, Tomorrow.io will use the funding to accelerate global SaaS operations for its weather intelligence platform and air quality offerings. In addition, Tomorrow.io will continue to focus on innovating its proprietary technology across artificial intelligence and machine learning, in addition to its space operations.

The company also today announced a name change which has been a year in the works.  “Changing the name of a company is always a delicate process and timing is the most important part of that process,” said Dan Slagen, CMO at Tomorrow.io. “The combination of our space announcement in addition to the Series D presented the opportune timing to announce Tomorrow.io, leading us into our next phase as a company with the goal to bring better access to weather for every country, business, and individual on the planet.”

The company will legally operate under the name of The Tomorrow Companies Inc. moving forward.

To learn more about the Series D funding and the launch of Tomorrow.io, see the blog post with full details from Tomorrow.io CEO and co-founder, Shimon Elkabetz.

Tomorrow.io is the world’s leading Weather Intelligence Platform™. Fully customizable to any industry impacted by the weather, customers around the world including Uber, Delta, Ford, National Grid and more use Tomorrow.io to dramatically improve operational efficiency. Tomorrow.io was built from the ground up to help teams predict the business impact of weather, streamline team communication and action plans, improve productivity, and optimize profit margins.

Currently CMO at Tomorrow.io, Dan Slagen is a 4 time start-up executive specializing in scaling global go-to-market functions from early stage to $100M+ in ARR. With experience in both B2B and B2C at companies such as HubSpot and Wayfair, Dan has built teams across marketing, growth, sales, customer success, business development, and also founded and sold his own video tech start-up. A frequent contributor and advisor to the start-up community, Dan has spoken at more than 50 conferences and has been featured in The New York Times, The Wall Street Journal, Forbes, CNBC, TechCrunch, and Bloomberg TV amongst others. Above all else, Dan believes in creativity, drive, and a people-first mentality.
Announcements